I’ve been wanting to redo my kitchen since I moved in….4 years ago. Let’s just say other projects were more urgent.

Here are the before pictures: 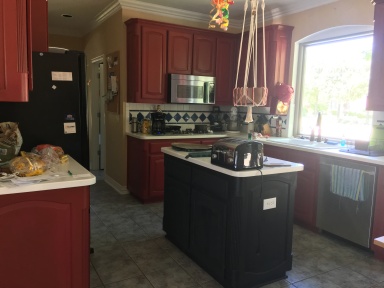 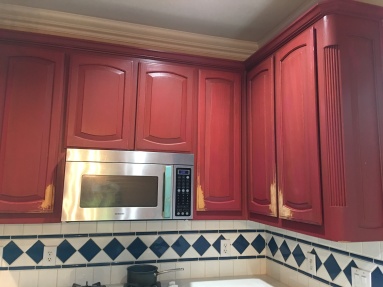 The kitchen was red, white and blue (and the black island – which was the worst, mainly because it was done with matte flat paint – who does that in a kitchen???) I don’t think they intended it as an American patriotic effort. I’m guessing from the chicken chandelier and pheasant curtains (which got removed when we replaced all the windows) that it was intended as French countryside. I didn’t mind the red so much as the fact that the paint was peeling and chipping off. It was time for a new look, but I’m busy and that’s a huge effort.

My husband decided to spend the weekend visiting his aging parents. I love them, but I appreciated not having to make the long drive (7 hours each way) to their home for the quick turnaround to come back two days later. I anticipated a lovely, quiet, restful weekend, breathing deeply poolside.

On Friday afternoon, I was working (I frequently work from home) when my daughter (who is off from school) came into the art room to kvetch about being bored (typical teenager behavior). I couldn’t figure out what it was she actually wanted except to be listened to, so I did that. She didn’t want to do this or that or the other thing, so I finally said, “What do you want to do, paint the kitchen cabinets purple?”

After some serious discussion among myself, my daughter and my son (also teenager), we decided it would be a fun surprise to repaint the kitchen cabinets before my husband got back from his weekend trip. And not tell him about it.

I texted him: “We have a surprise for you.”

He replied, “I love surprises.”

We had talked previously about painting the cabinets so I didn’t feel too guilty choosing the color without him. I warned the kids – “This is going to be A LOT of work. and if you abandon me halfway through, I am going to cry.” They agreed to stay in it to the end.

Side note: my son got his driver’s license last week and it was FABULOUS having another person in the house who could pick up dinner on their way home from work and run to get take-out while the kitchen was a disaster zone.

I don’t recommend trying to unload all the contents of the kitchen, sand and wipe down the cabinets, put on five coats of paint in two colors and add pull handles to all the cabinetry in a two and a half day time period. However, if you’re a workaholic taskmaster like me, it can be done. The kids begged for breaks, which I gave them (I couldn’t have done this job without their help), but that job took multitudinous solid hours of manual labor. My whole body is now stiff. So much for the morning walks and afternoon swims in the pool on my peaceful weekend off.

My daughter also monitored my husband’s whereabouts with “Find My Friends” on the iPhone so we’d know when he would arrive home. It had become a competition. Could we finish in time to pretend that nothing had happened while he was gone? “Surprise! We bought bagels!” became the running joke. 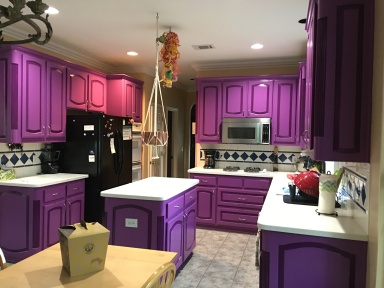 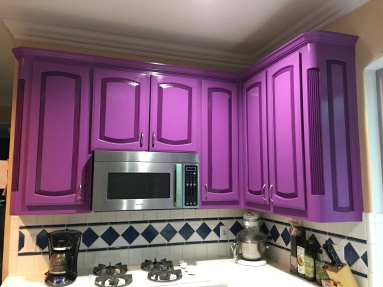 When my husband got home (we had only about 10 seconds to spare – as I was putting that last screwdriver away, my daughter checked “Find My Friends” and exclaimed “He’s in the neighborhood!”). He walked in the door, dropped his bag and said, “Is that purple or am I hallucinating?”

It is bright and it does take some getting used to (and the type of light that hits it makes it look like different colors from plum to fuchsia), but I LOVE IT!!

All those realtors and people who say to do your house for other people can jump out of a tree. I believe in doing up my house for me and mine. I can always change it later if (when) we eventually sell.

Besides, it’ll probably be time to repaint again by then anyway.