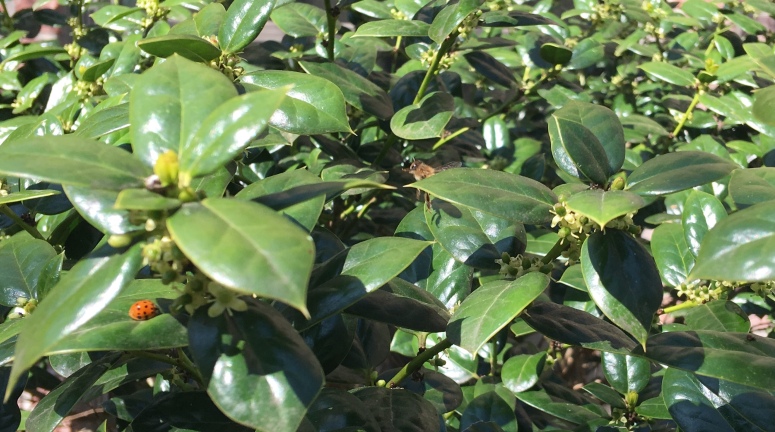 There is this holly shrub outside one of the windows of my house. It’s like watching the nature channel. The Eastern Waxwings come pick it clean of its tiny red berries (that happened a few weeks ago) and now, it has itty bitty flowers that the bees love – and I love to see bees in my garden…and ladybugs… because it means healthy garden. Plus earthworms. They’re the best! But I digress…

I was outside this weekend weeding my flowerbeds, some of which are underneath this shrub (because it is too big for the space in which it was planted but I’ll save that rant about people who don’t plant properly for another day). The point is, the weeds that grow under this shrub are those ones that have the beautiful, delicate white flowers (like strawberries or raspberries) and WICKED SHARP thorns covering every millimeter of the plant. These are the only plants for which I wear garden gloves, mainly because I prefer to feel the dirt and the plants between my fingers even if it means scrubbing soil from my fingernails. I am severely allergic to poison ivy, so this means I walk on the wild side.

As I was sort of climbing under this prickly shrub to pluck these horridly painful weeds, I could hear, just above my head: BZZZZZZZ. I know the sound of bees but when I looked up I was not prepared for the sheer number of bees. BZZZZZZZ. Hundreds of bees, buzzing just above my head. BZZZZZZZ. I hoped the bees knew that we have an understanding: I won’t bother them and they won’t bother me. I hoped I was right about that; after all, they seemed very well occupied in their little flowers. The picture above doesn’t do the scene justice. There is one bee in the photo, which was taken a few days later when I wanted a photo of the bees. This one obliged to be present and to stay in the frame long enough for me to capture it. But that day there were hundreds. BZZZZZZZZZ.

As I was crawling under the prickly shrub pulling the thorny weeds and hearing the buzzing bees, I thought, “this is fairly dangerous. Gardening can actually be quite dangerous. I am quite the badass.” Of course, I was playing by the rules: I don’t bother the bees, the bees don’t bother me. That sound is still a bit unsettling. BZZZZZZZZZ.  I am happy to report no one (no bees, no me) was injured in that weeding event.

How can something so small create such anxiety? Well, for starters, it’s not really one bee that’s the problem. It’s the hundreds of them (unless you’re allergic; then it could be one, I suppose). But bees are such valuable creatures – without their pollination, we (entire human population)’d be dead. Swarming together and angry, we (the individual)’d be dead. BZZZZZZZZ. The sound is the same, because it is merely the sound of wings flapping very rapidly. However, that sound is like a reminder: one false move and the swarm might turn on you. The fear is legitimate, yet imagined. It is my fear of what MIGHT happen that causes the anxiety, not what is actually happening. Because what is actually happening is that bees are flying around some flowers. The fear is all in my head. Had I refused to weed that day because of fear of the bees, that also would have been only in my head and quite unfounded. And I would not have had the exhilarating experience of living with and working alongside bees.

The bees and I quite peacefully coexisted together in close proximity that day. I to be and weed, they to collect nectar and pollinate flowers. No value judgment – not from the bees, anyway; and as for me, if anything, I saw their contribution to this microcosm as waaay more important than mine. I both love and fear bees. They are creatures like me and yet they are not like me. If love can be defined as inclusion of those different from myself and respect for our differences, then I guess love really does drive out fear.