I was on my way to a meeting, traveling in the middle lane of a [3 lanes each way] road, when some jerk in the right lane suddenly decided to cut me off. I honked and put my brakes on, thinking “what a jerk” and I thought the incident was over. I heard squealing tires behind me. A white Honda suddenly came up on my right and crossed into my lane and side-swiped me. Now I’m thinking “what the h*#&$&$*#?!?!?! are you doing??? Why did you hit me?”

She pulled over into a car lube shop, jumping the curb and popping off a hubcap. I pulled over too, to inspect damage and do the obligatory insurance exchange. I asked her what happened and she (no offense, millennial, but she was like 19 and pretty casual about the whole thing, said “no damage was done to her car so… sorry (shrugged her shoulders and walked off).” I looked at her car: um, yeah there’s damage. The broken tail-light and the big scrape mark where you hit me on the back corner of your car. She said she totaled a car last month so this was no big deal.

My car took worse damage – although I wasn’t hurt, thankfully – on the front corner, crumpling the side of the bumper. I felt the bump and saw the plastic fly (hers, apparently) but since she was going in the same direction I was, it was fairly minimal. Interesting side note: for parts, the bumper costs about $200 but the headlight costs $450.

The last time I had a tiny bender like this the police were called and told us since there were no injuries, there would be no report and they don’t usually respond to such minor incidents, so this time I didn’t bother to call the police. We exchanged information and I went on to my meeting.

When I got home, I called my insurance company and her (parents’) insurance company to file a claim with them to pay for the damage she did to my vehicle. Well, I’ll be if she didn’t just flat out lie her a** off to the insurance company, claiming that I changed lanes into her. The best I can reconstruct it is that she swerved out from behind me and as she over-corrected her swerve, she fishtailed and the back side of her car swung over and hit the front side of mine as she flew by. Her insurance company (with no witnesses or police report) assumes she is correct and not at fault, therefore my claim was denied. Can you believe that??? Sadly, I can. I imagine her parents schooled her very intentionally in “don’t ever admit fault” and since she is apparently in a lot of accidents it should come in handy for her.

I am not a vengeful person, but I do have a bit of a temper. This incident has got me flaming angry, for several reasons. one: as stated above, this is not the first time someone else’s mistake has put me in danger and caused me to spend a lot of money fixing (or replacing) my car. two: I get that people don’t like to admit fault because it costs them higher premiums on their insurance, but if it is your fault, d**it, then be a person of integrity and own it. I think I’m the angriest because I can’t get an opportunity to look her in the face and call her out for her lies. I talked to her right after it happened. She knows it’s her fault (actually, she wanted to blame the person who cut me off, or her car’s tires for doing something weird).

The only person she doesn’t see as having fault is herself. Um….? I imagine that her recklessness will result in more accidents. I should probably feel sorry for her. It’s difficult to feel sorry for someone who shows no sense of remorse. She’ll probably think the wreck that kills her won’t be her fault either.

My oldest child is now nearing the age of driving. At this moment, that thought scares me – not because of him (he is very cautious and a meticulous rule-follower) – but these other people who drive like it’s a big game of bumper cars. “No big deal,” she says. $1500 in car repairs? No big deal? Yeah, right. Thanks for the three days without a vehicle and the pleasure of spending that kind of money on my car for the accident that was YOUR FAULT. I’ll get over it. I’m not physically hurt. I am fortunate to have the financial ability to take care of it. But it does mean cutting out something else I really wanted.

The anger about it is of no use to me except as an indicator: what is it that I am really upset about? Is it that someone else is forcing me to spend money (because I have a big problem with spending money, especially on myself)? My car can be fixed, my time…well, it’s inconvenient but not the end of the world. Is it that someone is blaming me for their mistake (because I hate to look like I’m in the wrong)? Or is it that I want to see justice served and vengeance poured out upon her (because once upon a time somewhere in my background there was a god who did that kind of thing)? I’d better be careful on that one. I might be deserving of the same pouring out due to my own error.

I was much more willing to offer this young woman grace when she was up front with me.  I didn’t get really angry until I found out she was blaming me for the incident. It feels so helpless – the adjuster telling me that since our stories don’t agree that they are going with their own insured (just as my insurance company would do if it were the other way around) and reject the claim – and I know it wasn’t his fault; that’s their policy. And truly, he doesn’t know which one of us is in error. There’s something so wrong with the “oh well, too bad. sucks to be you” that happens to people over and over and over again. And I don’t just mean me. I see it everywhere: people in poverty, with disabilities, who are in the “wrong” group.

Last week my daughter’s school had a passion project and the students made presentations. One of my daughters’ friends did a presentation on Real Life Super Heroes. I had no idea this was a thing.  I thought it was pretty cool. I took a picture of one of the quotes from one of the heroes: 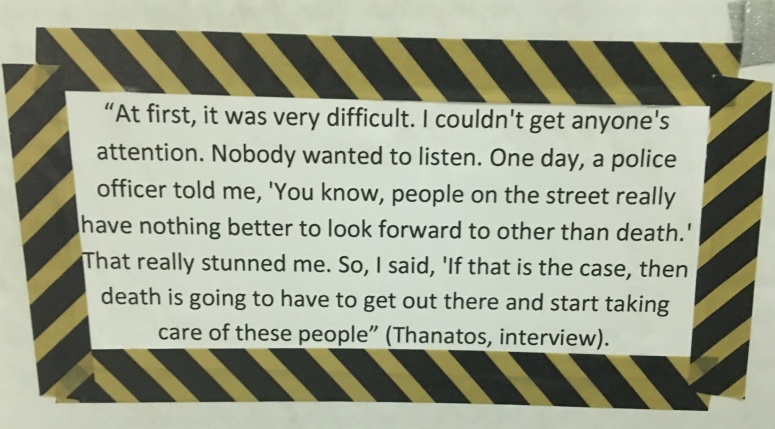 “Thanatos” means “death” so it’s a pretty cool name for a super hero who talks like this.